We were all excited when we got our habitat signs.  We decided to add a couple of small ponds to the picture. We added a 350 gallon pond near the back of the habitat and a 150 gallon pond by the deck.  A little waterfall made a wonderfully calming sound as it bubbled and splashed away.  It is so soothing!

The big pond. This isn’t the best picture, but I will have more down the road for you to see.

Bull Frog…Can You Find Him?

What is a pond without some bull frogs?  We got some tadpoles to make the ponds more interesting.  I even found some “frog crossing” signs online.  It took a while before we started spotting the little guys.  They were so cute! Every day I looked forward to going out to the habitat and finding the frogs.  They’d just sit there and blink at you in the sun.  They were so cute! 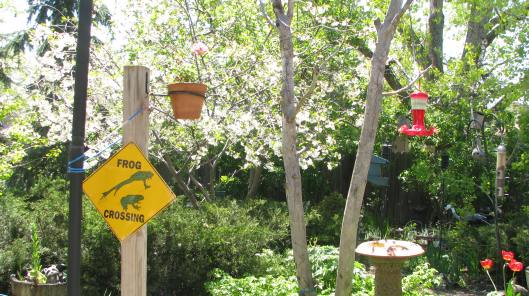 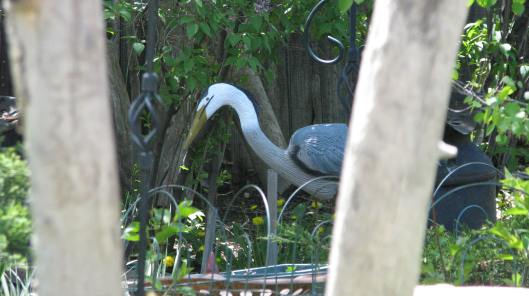 A Heron Statue…Looks Real From a Distance

Actually this is a heron statue.  There is a story behind it being by the big pond.

One night we had someone knocking anxiously on the front door.  Our next door neighbor was at the door all excited.  She told us that there is a heron on our roof.  Well that’s something you don’t see or hear about.  My husband went outside to see if he could see him.  In the meantime I heard a thud out on the deck.  I peeked out my bedroom window and there was a heron standing on the wicker rocking chair on the deck.  Glenn, my husband, made his way to the back door and opened it slowly.  He found himself nose-to-nose with the blue heron.  The heron was very tall.  They just stood there looking at each other.  Then the heron took off back to our roof top.  I have a photo of the rooftop, but you really can’t see the heron…he was in a shadow.

We giggled and went back to bed.  It turned out that there was a reason the heron was in our back yard.  He was looking for a night-time snack.  That horrible bird ate our baby bull frogs!  I was so sad….!  We did some research and were told that if we put a statue of a heron out there, that no other heron would invade that territory.  It worked…we haven’t seen a heron in the back yard since.  We never restocked the pond with frogs either.  We are hoping to some day soon.

Having a wildlife habitat can be a lot of fun and very enjoyable…but these kinds of things happen.  I have more stories to share later on.  It is sad, but you have to realize that it is nature.  The herons have to eat too.  They can just go dine somewhere else from now on!